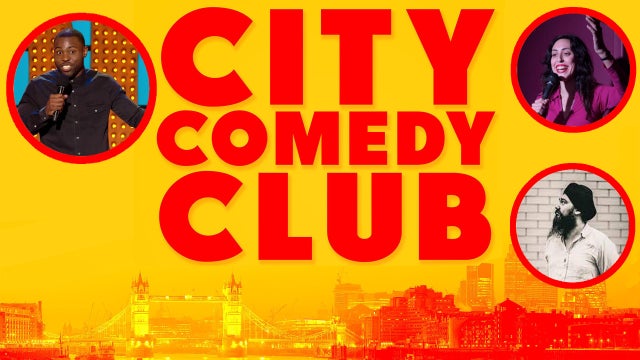 Double Edinburgh Award nominee Darren Harriott’s TV includes, co-host of British as Folk, host of Live at the Apollo and Dog Ate My Homework, team captain on Guessable and series regular on Don’t Hate the Playaz.

On radio Darren has had two BBC Radio 4 series Black Label, which covered his time as a teenager in gangs, and the second series Red Label came out over the summer. He has hosted Newsjack Unplugged and the Radio 4 Summer Festival. Other radio appearances includes The News Quiz, The Now Show, Fighting Talk and Best of the Fest. Podcasts include Evil Genius, Dave’s CALM Podcast, Griefcast, Susan Calman’s Mrs Brightside, Daddy Look at Me, Wheel of Misfortune and When No One’s Watching.

Daman Bamrah is one of the most exciting and unique new comic voices to emerge from the London circuit. A British-Sikh performer with energy, raw wit and heart, the in demand Daman is known for his topical writing, acute observations and imaginative storytelling. His blend of carefully crafted jokes along with his signature charm have already secured him top spots at the country’s leading venues including Angel Comedy Club, Up The Creek and The Museum of Comedy.

Daman began performing improv while at university and went onto train with the prestigious ‘Second City’ before applying his skills to stand up. Since then he has built up his accolades racing to the semi-finals of So You Think You’re Funny?, and being a finalist for the Max Turner Award, Monty’s Stand Up Nights, Comedy Virgins Summer Competition and winning Up the Creek’s notorious new show The Blackout.

During the 2020 lockdown Daman began producing multiple viral videos on TikTok and starred in Lynx’s ‘Men In Progress’ branded campaign.

Blake AJ is an exciting new talent on the UK comedy circuit with an energetic level to his performances and full of 'good mood comedy' (Oxford Comedy Festival) - as opposed to all that bad mood comedy. He was Runner-up at the Hackney Empire New Act of the Year award in 2020 and is a future name to look out for.

‘An elegant routine… Smartly realised and with a good sense of timing.’ – Chortle, Steve Bennett

Finlay Christie started early, he was featured on Blue Peter as a stand up at 14 years old! He went on to perform for Comedy Club 4 Kids, performing with acts such as, James Acaster, Robin Ince, and Iain Stirling. Since Comedy Club 4 Kids he has gone on to perform at The Comedy Store, Up the Creek, The Boat Show, Banana Cabaret and more.

In 2019 he became the youngest ever winner in the prestigious So You Think You’re Funny competition. Past finalists include Peter Kay, Lee Mack, Sarah Millican and Hannah Gadsby.

Finlay has over 170k+ followers and 8 million likes on TikTok. His sketches, which are averaging at 3 million views and have been featured on LADBible, UrbanTV and Al Jazeera. He is currently making content for Amazon prime (2 million views).

As an actor Finlay is known for The Bleak Old Shop of Stuff (BBC2) he had a featured role in all episodes alongside Stephen Fry, Robert Webb and Katherine Parkinson. He also appeared in the Go-Betweenies (Radio 4) and was the voice of Yo-Jo Jo in over 50 episodes of Waybuloo (CBeebies)

Finlay has also done commercial voiceovers for clients such as Sony, Disney, Nintendo, Nationwide and eBay.

He is also fluent in French.